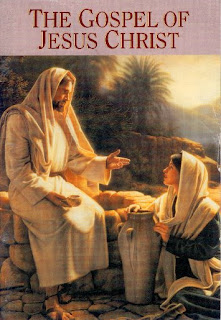 Our third meeting was much more fruitful. Both LDS missionaries seemed more energetic and ready to get into stuff. They provided us with a pamphlet for our third discussion and said, “Today we’re going to go over the gospel. There shouldn’t be anything different here. I’m sure we will agree on this because it’s just the gospel.”

Becky and I have been careful with which questions we raise because we do not want to chase so many rabbit trails that we do not get to hear the lesson that they have prepared for us. It has been awhile since we have been through the discussions with the LDS Missionaries. The LDS church has a new missionary manual and have changed the way they present the information to those who are interested in their religion. We are raising some questions, but our objective at this point is to get through the material and hold our major objections until after we have been through the new material. The differences between the gospels of Mormonism and Christianity are quite glaring once you know where to look.

After Elder J. made his comment, I was wondering how difficult it was going to be to remain on topic because the gospel is our favorite thing to talk about with LDS Missionaries. We remained silent and let the guys guide us through their material. Once we got to page four of the pamphlet, Elder T. asked us a question about repentance. I explained that a lot of the things we had been discussing sounded the same, but that they were different because our words have different definitions. I asked him to explain what he meant by repentance so they both touched on it a bit and then moved on to other things in the pamphlet.

As we were going through the lesson material, I was praying and asking God how to proceed. I didn’t want to get off track, but I didn’t want to waste a perfect opportunity either. Neither one of these guys are as well-versed as other LDS missionaries we have spoken with so I was wondering how we were going to be able to direct them to the verses that we want them to go to without us bringing up the verses ourselves. At this point, they do not know that both of us have read the Book of Mormon and are familiar with it so to start quoting BoM verses would be out of place.

As we were finishing up with the material, I was praying and got an immediate answer to my prayer. I saw a green light in my mind and heard the promptings of the Holy Spirit telling me, “Go for it!” I then asked a question about repentance and referred back to page four of the pamphlet. Under repentance, one part say, “Stop doing what is wrong, and strive never to do it again.” I asked, “What if you do it again? Is it still considered repentance?” Both guys answered “No” in unison. They also made the point very clear that one cannot be forgiven until they have completed their repentance.

Becky was explaining that if she needed to stop sinning before she could be forgiven, then there is no way she can be forgiven. I started praying again, “Lord, I don’t know how we’re going to get there, but this would be a great place to bring up First Nephi 3:7.” Right then, Elder T. said, “A verse just jumped right into my mind. I know this one will help.” He started thumbing through his BoM and I knew he was going to the verse I had just prayed for. Elder T. said, “This verse is found in First Nephi chapter three.” I smiled and started nodding my head thanking God for that awesome display of sovereignty.

What happened next gets pretty detailed so I’d better end here.
To be continued…